You Just Never Know Who You’ll Run Into!

While at The Belly Dancer Of The Universe Competition 2015, two very important people from The Fez that I had been trying to locate to interview just happened to appear! 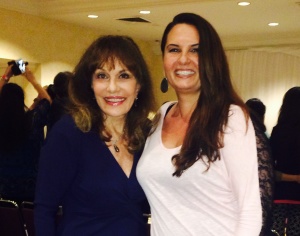 First was Tanya Lemani, dancer and actress with a long list of credits for Film, Theater and Television including an appearance in a special with Elvis and a featured part in an episode of “Get Smart” among many others!  Tanya is also author of the book, “Have Belly, Will Travel. http://tanyalemani.com/

Among her many credits, Tanya was also a dancer at The Fez!  Look for her in the documentary:)

I also happened to run into one of the most creative percussionists in Arabic Music, Mr. Raja Zahr!  Raja went back to Lebanon after many years living in the U.S and he also played at The Fez!

Director Producer, Roxxanne Shelaby, a world renowned belly dancer, brings us into the heart of the Golden Era of Hollywood with "The Fez"-the first Restaurant and Nightclub dedicated to the Arab culture on the West Coast.